For most of my life, I was afraid of bees.  This made my childhood in our suburban backyard a fraught affair.   You see, my Mom loved rhododendrons, and planted them in different corners of our yard.  I dreaded bloom time, because the rhody bushes would come alive with clouds of visiting bumble bees.  I devised mental maps in my head of relative zones of safety throughout the yard to navigate me as far from these shrubs as possible.

So I find it amusing that when I now hear the buzzing of bumble bees in a rhododendron bush, I make a beeline toward it instead of in the opposite direction.

Janet’s 2008 study of local bumble bees was a turning point for me.  I was at first highly dubious of her work with stinging insects, but the more she shared her newfound knowledge with me, the more I became fascinated by these little creatures.

When I eventually started to take pictures of bumble bees inside rhododendron and azalea flowers, I made a surprise discovery that finally cracked the code of why bumble bees are so attracted to these plants.

First off, the flowers of many rhododendron and azalea plants are chock full of nectar.   When in bloom, these shrubs are like neighborhood fueling stations for bumble bees.  The bees’ abdomens pulsate like little basting bulbs as they suction the precious sugar solution from the nectar repositories deep in the base of the flowers.

But the other thing these blossoms offer is pollen; which I accidently discovered while taking bumble bee photos at the magenta-colored azaleas in my neighbor’s yard. 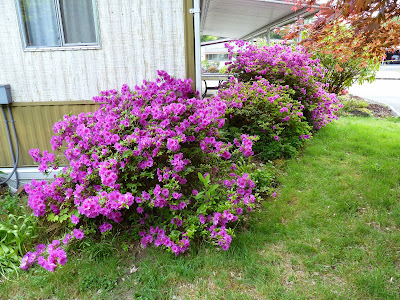 I kept hearing the bees making funny noises as they landed on flower after flower.  I was perplexed by what they were doing.  On closer inspection, I noticed that azalea (and rhododendron) anthers are little “pollen pots”  jammed full of bumble bee larvae food. 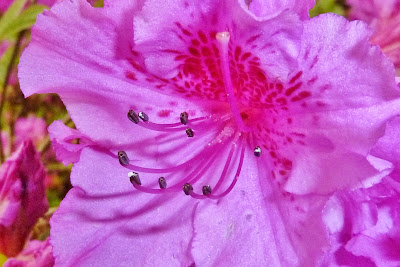 The openings to these pots are really tiny, so to expediently “get at” the pollen, the bumble bees were using a technique at which they excel: buzz pollination.  Grabbing hold of a pollen pot, a bumble bee purposefully vibrates its flight muscles (but not its wings) at a frequency that makes the anther eject its contents.
Similar to pulling the ripcord on a tightly-packed parachute, the pollen, connected to viscous “threads”, emits from the pot like a baby spitting up milk.


he bumble bee quickly gathers up these threads, but sometimes filaments of pollen festoon the bee’s body. 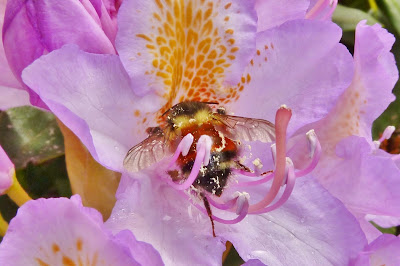 Other bee species glean pollen from rhododendrons, as well.  I’ve watched solitary ground-nesting bees extract the pollen directly from the anthers using their mandibles.  They too are gathering food for their larval young. 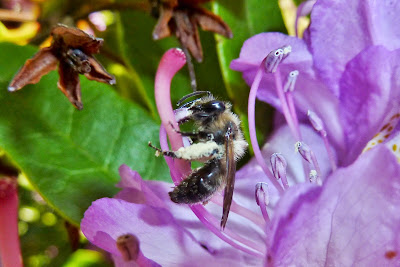 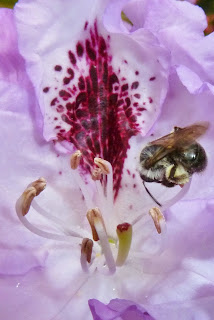 Bumble bees utilize rhododendrons in one additional way that is still a mystery to me.  When the plants are near the end of their bloom periods, the bees seem irresistibly drawn to the bases of the flowers (calyxes), even if the blossoms are falling off, or are gone completely.  Are the bees simply going after the last dregs of nectar, or (and this is sheer speculation on my part), could they possibly be collecting some sort of substance on the calyxes? Honey bees collect tree resin for its antimicrobial properties, to help line their nests.  Maybe bumble bees do something similar, especially since all parts of a rhododendron are poisonous, even, apparently, the nectar:

Whatever the bees are doing, this activity is not without its risks.  Anyone who has ever dead-headed rhododendron flowers (something we had to do quite often as kids), knows that certain rhody varieties have very sticky calyxes.  One day, while visiting a friend’s house, he pointed out several bumble bees that were completely stuck to calyxes on one of his rhododendron bushes. 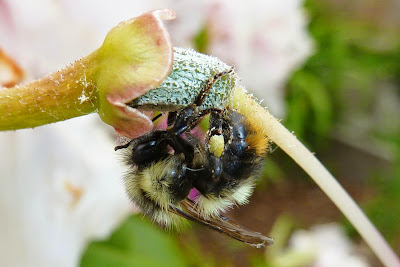 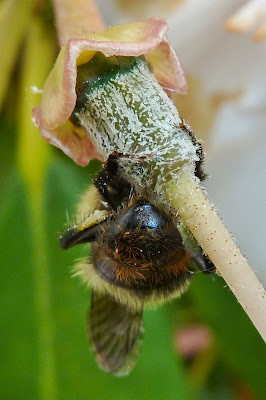 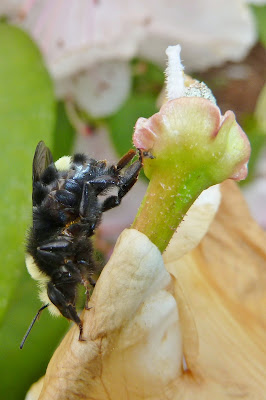 The poor things were struggling mightily to no avail, and we were reluctant to try to help them for fear of being stung.

Taking photos of bumble bees on rhodies and azaleas has been a transformative experience for me. Besides learning about how the bees interact with the flowers, I have gained a much greater appreciation for these previously-avoided plants, and for the beautiful world that pollinators inhabit. 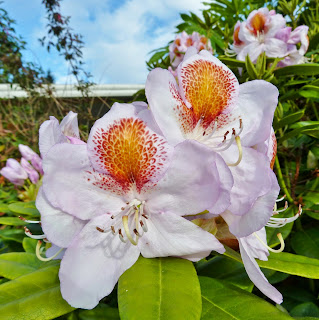 We are writing a series of ebooks on nature topics. The series titled A Naturalist's Eye starts with Writings from Puget Sound Country. You can go to Amazon and google Janet Partlow; our author pages will appear and you can order the books through Kindle. Keep tuned: other books are in process.

If you live in the greater Olympia area and need some garden ideas, we can come to your home. In a 90 minute consultation we will help you evaluate your landscape for its habitat strengths and needs. If you live outside our region our ability to help is different, but we can still provide you with a questionaire and offer some design ideas.
Glen and Janet

Past classes and workshops

Want to be on our Nature interest email list?

We contact people regularly with notices about great upcoming events, whether we teach them, or other people do. It's a great way to stay in touch with what's happening on the local naturalist scene. Email us at Olypollinators.com